When you think of visiting Savannah, craft beer may not be the first thing that comes to mind. We get it - you think of the twisting limbs of Live Oak Trees, hung with Spanish Moss, of historic homes set upon dimly lit squares, shadows wavering across the drawn curtains. Savannah’s history and beauty has drawn you in, along with the promise of a ghost story or two, and you’re here to see all the Hostess City of the South has to offer. So does that mean you’ll be eating nothing but fried chicken, buttery grits, and okra, washed down by sweet tea or generic beer?

Savannah has become a foodie haven (we’ll get to that later), and we like to keep things local - locally caught fish, locally sourced cattle, locally roasted coffee, and locally brewed beer. You don’t need to know a lot about beer to enjoy Service Brewing’s Compass Rose IPA, but if you’d like to learn more, why not take a tour?

Moon River, who celebrated their 17th Anniversary in April, is “housed in one of the oldest, most historic and genuinely haunted buildings in Savannah.” Located at 21 W. Bay St., Moon River “provides the ideal brewery and restaurant experience.”

While my only dining experience there was many moons ago, I recommend it as a must-try Savannah eatery. These days I’m more inclined to spend an evening playing games - like the giant 4 In A Row they have - and hanging out with friends in their 5,400-square foot Beer Garden. Psst… their Beer Garden is also dog friendly!

Savannah is undoubtedly a college town, but we’re also a military town. With Hunter Army Airfield located in Savannah, and Fort Stewart in nearby Hinesville, it makes sense that veteran owned and operated Service Brewing has taken root here. It also doesn’t hurt that their beer is mighty tasty. 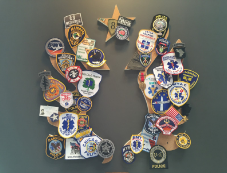 Located at 574 Indian St., Service Brewing may not be in the middle of the action, but it’s a worthy stop during your stay in Savannah. They have several year-round brews, some seasonal brews, and some specialty and research batches only offered in their Tasting Room.

Each season, their Tasting Room raises funds to assist charities that support our country’s service men and women and first responders. If you’ve served, you may want to bring a patch to add to their collection

They offer brewery tours Thursdays and Fridays, 5:30 - 7:30 p.m., and Saturdays 2 - 4 p.m. Make sure you keep an eye out for their security kitties, Chinook and Blackhawk.

Southbound Brewing is about more than just quality beer, they’re about quality life. Their space is great for private events, and they’ve been known to host quite a concert. Have a yogi in your life? Then you may be interested in seeing if one of their Pints + Poses classes is taking place while you’re in town! The session is $25 per person ($12 just to join the yoga class) and includes 6 samples and a souvenir glass for the public Tours & Tastes that immediately follows.

They offer regular tours every Wednesday - Friday starting at 5:30 p.m., and Saturdays at 2 p.m. Tours run every half hour and they don’t accept reservations. Tours are $15 and comes with 36 oz. of beer served on-site and your choice of a 22 oz. bomber, 32 oz. growler fill, 6-pack, OR a pint glass.

Coastal Empire Beer made their debut at The Distillery on the first night of the first Savannah Craft Brew Fest. That week, their Savannah Brown Ale took home first place in the People’s Choice Award. Since then, they’ve won several more awards, including the US Open Beer Championship three years in a row, and grown from a contract brewery to a full production brewery.

Savannahians love a good festival. We’ve got so many food-centric festivals in the fall, you won’t want to stay for just a week! The only thing better than our Bacon Fest-yes, a festival all about bacon - is our festival all about beer. Savannah Craft Beer Week starts at the end of August and runs into the beginning of September. It’s a week filled with all things beer, culminating with the Savannah Craft Brew Fest. This year, it looks as though the dates for both festivals will line up. We’ll be keeping our fingers crossed for a weekend full of fun, bacon, and beer!

Check out this map we put together for you to get a sense of where in Savannah these breweries and beer spots are. Bookmark this page or share it with yourself so you can easily find this map to use while you are in town.