5 Savannah wedding venues you may have overlooked

Planning a wedding is never easy. From the dress to the décor, there are so many decisions to be made and so many options to choose from. But the first decision should be the location, and the others will follow. Savannah has some great antebellum qualities that might interest the soon-to-be bride and groom in a destination wedding. From an outside wedding at Forsyth Park to a church wedding at The Cathedral of Saint John the Baptist, there are a few things a bride and groom should know before saying "yes" to their venue. 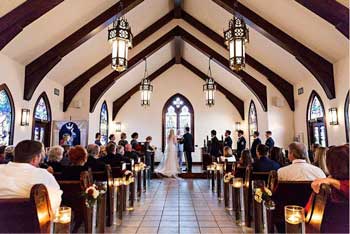 Small but Mighty: The Gingerbread House is an ideal venue for a small wedding. Accommodating around 50 guests, the house sits in the heart of Savannah on Bull Street. Kasey and Nick Marlow, who got married in December, says the Gingerbread House was near the top of their list when looking at wedding venues before deciding on the Mighty Eighth Air Force Museum

The National Mighty Eighth Air Force Museum is one of the most unique venues on Savannah’s extensive list. About 20 minutes from downtown Savannah, the museum has its own chapel and can seat 80 to 250 wedding guests. It also has a memorial garden in which a couple can be married; in the background rests a spectacular B-17. During the reception wedding guests are free to roam the museum where they will find 12 exhibits featuring a variety of airplanes used throughout the wars, along with many other artifacts.

Vows Under a Veil of Trees
Forsyth Park is the most popular wedding venue in the city, according to Sarah Wright, wedding planner and owner of Everlasting Memories. While many people believe this to be the quintessential Savannah location, there are a few things couples need to consider before booking it.

When renting the park, there are two major fees: a permit for the location and an off-duty police officer. Also, it’s not an entirely private event. "A tricky thing with Forsyth is they block off the sides but they only rent the north end of the fountain," notes Wright. While an off-duty police officer is required, this helps the wedding remain somewhat private, consider the public is free to roam south of the fountain.

Savannah is also known for its inconsistent weather. If it looks like it is going to pour on the wedding date, the couple can call the city at least 48 hours in advance to get a refund.

"Another thing that couples don't think about is transportation for the guests [from the ceremony to the reception],” says Wright. “If they're not locals, everybody is either flying or they are driving from who knows where and [couples] don't think about getting guests from Forsyth Park to The Gingerbread House”—which is a 15-minute walk.

The Cathedral of Saint John the Baptist is a widely known historical building that has become the face of Savannah on many postcards. And while it’s undeniably gorgeous, it’s not available to everyone. Wright speculates that only a few churches will let non-members be married there. And while The Cathedral will allow couples the opportunity to get married even if they aren’t members, they must be Catholic.

The Mackey House is one of the more flexible venues, accommodating whatever vision the bride and groom may have. Couples have the option for an outside or inside wedding. The house also has a reception area with a built-in dance floor along with a bar and a DJ booth. Having attended my father’s wedding here in 2009, I can say that this venue really has made a name for itself because of the freedom it gives couples and how it puts the bride and groom at ease before and during the ceremony.

These venues just scratch Savannah’s surface of gorgeous wedding locations. A complete list of venues can be found in every issue of Savannah Weddings. You can also check out our Savannah Wedding Guide for more venue ideas and information as well as a wedding lodging discount for you and your friends and family.