“There’s something about sitting down and enjoying a good cup of coffee that breaks down barriers and opens the door to friendship.” – James Spano

Founded by James Spano in 2009, Cup to Cup Coffee Roasters create small, specialty batches of coffee that they sell to local restaurants, bed and breakfasts, and stores. With the one-year anniversary of the opening of his first retail shop, I sat down with Spano to discuss business, brews and everything in between.

A Man and His Brews 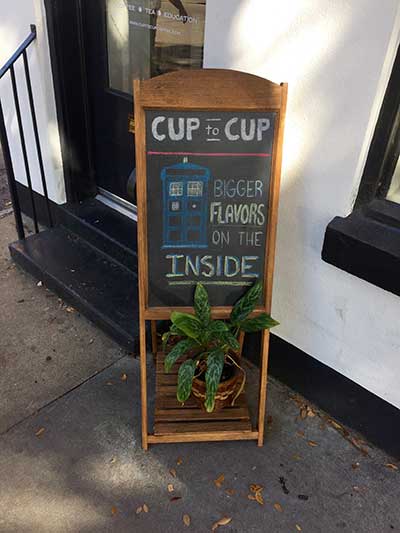 Stepping into Cup to Cup Cafe brings friendly conversation. I follow Spano's smile to the bar, where he asks if he can make me something.

I ask, "What's your favorite drink?" to which he replies everything's his favorite, or he wouldn't be in this industry.

"Cold," I plead, having just biked across the city in 80-degree weather. I find a seat on a tall wooden stool at the bar while he whips up what he calls a "Cascara Fizz,” a summer specality. He explains to me that cascara is the dried fruit of the coffee cherry, and "Cascara Fizz" is made from his house made cascara concentrate and ginger syrup, mixed with sparkling water (to create the "fizz"). His menus – one for to-go orders, the other for in store – have standard, yearlong traditional drinks, but different seasons see different tastes.

"Over winter, we did Eggnog, we did Hot Cider," says Spano, while drinks like Cascara Fizz and Coffee Tonic will be featured on their summer menu. They're "just some different, unique things that aren't found everywhere else in town," he notes.

Sporting an olive-green t-shirt, jeans with a simple, brown leather belt and brown loafers, Spano is casual and relaxed, feeling at home in his shop. He speaks to me in between helping customers, as machines whir and hiss in the background.

After working in a coffee shop during his college years, Spano found himself with an opportunity he couldn't decline – traveling to Guatemala. While in South America, he found an American-run coffee shop and discovered a passion for coffee that could fuel his career. Spano reached out to the owner of the shop. "He hosted me... [I] spent some time there learning how to roast coffee, visiting coffee farms, learning about the whole process from the farm side," Spano says, allowing him to gain the knowledge and gratitude he has today.

The Company and Competition

"We both offer a good product, and I think we offer something of a choice," Spano says, speaking on behalf of the market competition. Cup to Cup holds its own against PERC, the seemingly dominate coffee roaster of Savannah. Spano attributes both companies' successes to their friendly rivalry, that maybe isn't a rivalry at all.

"It's not uncommon...for me to go over and chat and say hi to Philip [the owner of PERC], how's it going. Or if, you know, either of us have been in a pinch like this past fall...say, 'hey, can you help me out?' We would do it," Spano says. He explains further that the two developed their relationship as both of their companies were starting out.

Of course, he doesn't deny the two are competition to one another, but he says, "We also both recognize there's plenty of room for coffee in this city and we want the coffee to be here."

PERC and Cup to Cup don't take part in turf wars. "We've had an agreement not to try to take clients from each other," says James, in an effort to make and keep their environments positive. Or as Spano describes it, "healthy."

"In the beginning, we said if we walk into a place to make a sales call and we see that they have Cup to Cup or they have PERC, we will walk away 'cause we don't need to do that. It doesn't need to be like that. We're peers. I like him. I think his coffee's good," says Philip Brown, owner of PERC. "Me and James are friends."

"It's not something that I stress over," Spano says. "Ultimately it comes down to choice. People want different things and so both of us being open allows more options for the public and that's only a good thing."

A good thing, indeed. Cup to Cup (beans and/or brew) is available in many restaurants and cafés around the city, The Foundery, The Grey and The Book Lady, just to name a few, as well as other locations in Georgia and South Carolina.

You can, of course, find Cup to Cup (brew and beans!) in the cafe, which has seen a good first year. Spano describes the first year or two as "establishing your base... a trial period... figuring out your busy and slow seasons." He acknowledges a hitch everyone felt, and one that threw off October, November and even December's business – Hurricane Matthew. The storm invoked a city mandated evacuation, effectively ending the tourist season early, and affecting the way both tourists and locals spent their money.

"So what October, November, December should've been, an idea of what a busy time would be for us, got thrown off," he says, though he mentions he's not worried with the tourist season, once more right around the bend.

The store sees the most customers on Thursdays, Fridays and Saturdays between 9 and 11 a.m., and then again between 1 and 2 p.m. Spano says he's noticed a blend of customers, both tourist and local. In the jumble of downtown, it seemed suitable for tourists, but he argues my point.

When it comes to advice for other would-be entrepreneurs, Spano offers this: "Whatever you do, it needs to be good. And so, I think, it's important for us to have good coffee because at the end of the day, we're representing farmers, representing people who work very hard their whole lives to produce a product that maybe they don't ever see and maybe they don't ever meet us. And so it's our responsibility to represent them as best that we can and show the world that there's value in what they think, in what they do and make that to the best of our abilities."

While Spano turns back to scoop ice into a Coffee Tonic, I finish my Cascara Fizz and close the glass-paneled door behind me, leaving the cafe with a good taste in my mouth.