Check out Beetnix: Your Superfood Destination 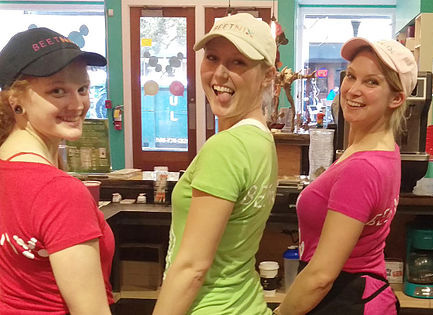 In early Spring, a new vegan “superfoods” and juice bar just opened its doors for the first time in Broughton Street. If you’ve missed all the commotion, don’t worry, I can fill you in. Gluten-free, conservative-free, pesticide-free, GMO-free, everything free! Except money. It still costs money.

Beetnix is just below the Dancing Dogs Yoga studio. According to Shelley Lowther, the owner of both, they aim to create a tightly-knit community between the two.

That’s how Beetnix came to be and it’s already bustling with clients.

“It’s been nonstop,” said Lowther. “I’ve always had the idea of having a juice bar or a health food store attached to my yoga studio. Providing people with other ways to get healthy. Not just the physical act of yoga and meditation but also bringing diet into that realm.”

Shortly after they opened, I had to wait in line to get one of the few juices they had left in stock. I got “Sun Salutation” and I was pleasantly surprised. Not just by the taste, but by the bottles themselves which came in laser-printed glass.

“The easy thing to do would be to use plastic. But we firmly believe that we sell a high-quality premium product and we think presentation should reflect that,” said Nicholas Buttimer, the general manager of Beetnix.

Buttimer also mentioned some of the thoughts behind the customer experience. He said Beetnix aims to be a fast and healthy venue for people with busy schedules.

“Half our menu flows through the chill wall. It’s all grab-‘n’-go. So they just stand in line and they’re ready to go and be back in the office,” said Buttimer. 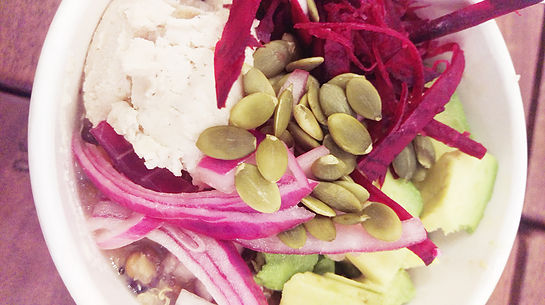 Lowther said she had the idea for quite a while. She felt that they had raised the bar for Yoga in Savannah, and it was time to raise it for superfoods and healthy smoothies as well.

“That’s where the inspiration came from; my wanting to eat that way and not having anywhere in Savannah to do it; from my traveling around and seeing things that Savannah was missing,” said Lowther.

Buttimer said he was very excited about the project. He left his career because he “wanted to be a part of it.” He and Courtney Hallway, the manager of Dancing Dogs Yoga studio, have been good friends for quite a while.

“We both used to be Starbucks store managers. It’s really fun getting to work with some of your best friends, doing things you’re really passionate about,” said Buttimer.

And they all felt very confident about Beetnix success. When asked how they realized there was a potential niche for a concept like it in this city, Lowther shared some of her traveling experience. She claims it allowed her to find that growing market, and she wanted to bring the idea into Savannah.

“If you look at places like California, New York, and even Florida, operations like ours –such as vegan or vegetarian cafés— are popping up everywhere. People love them,” said Buttimer.

The recipes are pretty extravagant, and they include a vast array of ingredients, from turmeric to pitaya and all kinds of seeds. The smoothies have some of the most interesting combinations in their menu –like a recovery smoothie for athletes. It has ingredients such as reishi (mushroom powder) for muscle regeneration and maka for stamina.

She is very interested in superfoods and has researched all kinds of roots, herbs, and seeds in creating the menu.

“Most of it was a process behind my kitchen counter. It started with me, but it’s also been a collaboration. I took the basis of how I would make my juice, and we’ve taken them to a bigger scale,” said Lowther.

Finally, I asked her where the inspiration for the name came from. She said it’s a twist on the concept of “beatniks.” She wanted something hip and fun.

“There’s an old Facebook meme “Lettuce, turnip, the beet,” and we were playing with things like that. Beetnix came out of it. It’s a throwback, but it’s also very relevant.” 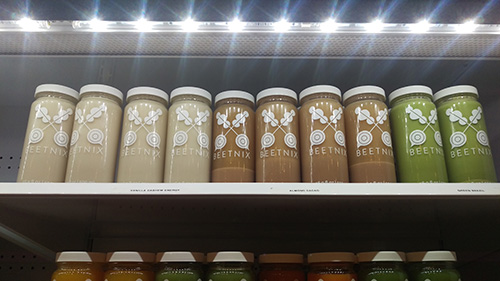 As for their recipes, here are some of my favorites:

This one was one of my favorites. It’s the only thing they serve hot, but it’s one of the best healthy meals I’ve tried in Savannah. The fresh hints of coconut paired with the buttery goodness of the cashew butter makes for a perfect dressing on tender lentils. The toppings were superb, crunchy and paired well with avocado and quinoa. If you go to Beetnix, you have to try this!

They have a long list of juices, some of which will absolutely surprise you, but afterglow remains their most popular one for a good reason. How they managed to cram in turmeric and ginger into the same drink and have it taste so good is beyond me. But trust this: this citrusy orange delight will have you coming back for more.

There’s a lot to say about this one. Let me start with this: it’s a food stylist’s dream. Seriously. Artisanal comes to mind with the beautiful presentation of this delicious treat. I wouldn’t be surprised if I started seeing it everywhere on Pinterest. The combination of a fruit and pitaya base, topped with more even fruit, delicious granola and honey is just spectacular. It tastes better than it looks and that’s already saying a lot.

I’m going to be honest. I’m not a fan of smoothies. I have a tendency to cringe at how sweet and synthetic they taste. Yet this one, as the name suggests, left me nothing but good vibes. It’s very green and it looks like some kind of weird home-remedy my grandmother would force me to drink if I had a bad fever, but it tastes absolutely delicious.  Slightly sweet and so, so refreshing. It was love at first sip.

I’ll admit, perhaps I’m a bit bias because I love protein-based meals so much, but this was my favorite salad by far. The ingredients make for a great, lean, healthy meal, and the dry fig and pumpkin seeds give it that crunchy goodness that I crave on all my salads. I tried it with the “Green Goddess” dressing, and I my only regret is not eating more.

The menu claims it’s so good it should be illegal. Maybe not illegal, but it is an incredible treat. This was, undoubtedly, my favorite thing in the entire menu. The chewy black rice accentuated the steamed coconut milk with rich hints of cinnamon. And the chia and hemp seeds were a nice touch of delicacy. You cannot go to this place without trying this one.